Think of CBBC’s hilarious Total Wipeout adventure game show and you’ll have a pretty good idea of what Surf Snowdonia’s Crash and Splash is all about.

It’s a mini assault course set over water and virtually guaranteed to have you making waves of your own.  Rosie and Max were too young to try it out but instead watched in giggles as Harvey and Max slipped and skidded their way over a slippery pole, traversed rope bridges and giant spinning balls and swung through monkey bars…but not without several dunkings. 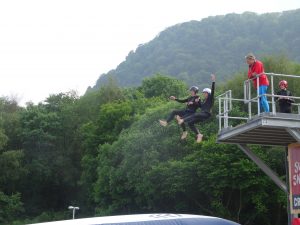 The grand finale is the best bit…. ‘the blob’ is a 33ft long floating air-filled pillow which one or two people jump onto from a platform, sending the person crouching at the other end flying up then crashing into the water.

According to Surf Snowdonia’s website, it’s the ‘most fun way’ you’ll ever be thrown into water.  It was…particularly for those viewing it from dry land.

The Crash and Splash course is part of the terrific inland lagoon at Surf Snowdonia where you can learn to ride the waves like a pro.

Find  out here how we got on when we tried out a lesson.