We love staying at La Croix du Vieux Pont in the tiny village of Berny-Rivière in northern France.  It’s around 70 miles north east of Paris and just a two-and-a-half hour drive from Calais so it’s easy to get to – and has plenty to do on-site.

It’s open from the Easter holidays until the end of October half term so it’s perfect for an out-of-season break.  You can take your own tent or stay in a mobile home with an outdoor holiday specialist like Eurocamp.

La Croix du Vieux Pont (click here to read more about the parc itself) is a great base from which to explore a stunning and fascinating part of France. Here are some of the best fab trips we’ve tried. 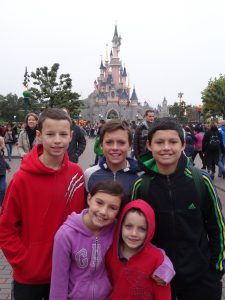 and is a very popular day out for families staying there.

An added bonus is the handy door-to-door coach service which leaves the parc at 7.50am and picks back up at Disneyland at 7.50pm (17 € adults, 14 € children, 10 € children under 2. Advanced booking advisable la-croix-du-vieux-pont.com/en/onsite-services/organised-trips/).

The journey takes around 75 minutes and takes the stress out of driving.. And believe me, you’ll need all your energy for what lies ahead. With just one day there, we opted to avoid the Walt Disney Studios part and concentrate on the Disneyland Park itself (advance Disneyland Paris tickets from £32 for both adults and children).

Start by picking up a map and programme at the entrance (we didn’t see any more on display around the park) so you can plan your must-see attractions around parades, shows and character meet-and-greets. Believe me the park is jam-packed, both with people and things to do, so don’t expect to get round everything as queues are often an hour-plus.

We made the most of it by splitting up at times, with the older boys – and Max’s friend Tom who was with us – heading off for big thrills on rides like the heart-stopping indoor roller coaster Space Mountain: Mission 2 and the looping Indiana Jones and the Temple of Peril. That gave Tim and I the chance to take Rosie and Freddie on more family friendly ones, like the beautiful Peter Pan’s Flight – a flying carpet-style journey around London and Neverland – and the mega fun Buzz Lightyear Laser Blast (my favourite!), where you blast laser beams at targets.

With hindsight we could have avoided waiting an hour-and-a-half for a 30-second meeting with Mickey Mouse – just long enough to take the obligatory photo.  But seeing Rosie and Freddie get a cuddle from Winnie The Poo during the famous Disney parade – themed around Halloween as we were there in October – more than compensated. 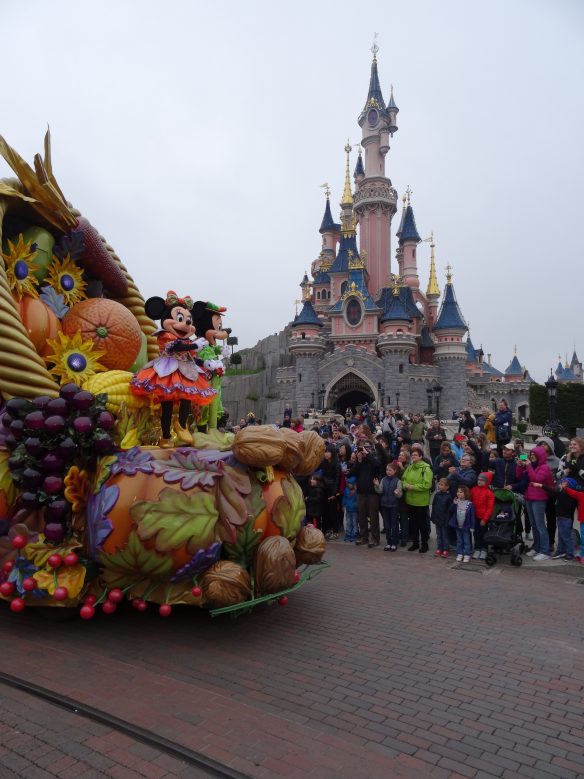 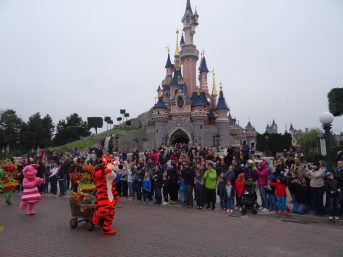 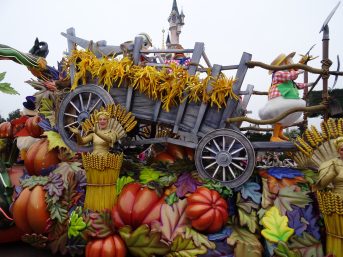 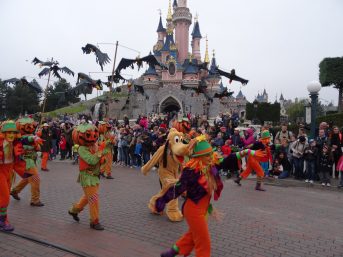 The whole family favourite had to be Big Thunder Mountain, a roller coaster thrilling enough to scare me senseless but seemingly mild enough for Freddie to laugh through. The best time to try this one out is early evening when queues are at their shortest; it lies in the Frontierland area at the far end of the park and we found that this part thinned out around then as visitors went for tea or returned to their hotels for a break before the evening excitement.

On the negative side, we found that ride information was often difficult to spot so you weren’t sure how long queues were or what height or age restrictions were imposed. For one ride we queued behind two sisters for 1 hour 20 only for the girls in front to be told they needed an adult with them. Not surprisingly, they looked crest-fallen. 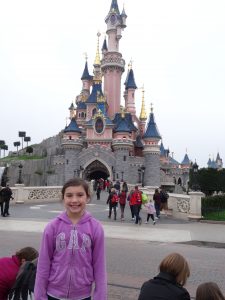 The food is disappointing too, particularly if you’re a large family on a budget. Bags are searched to prevent you taking food in and for some reason there are no kiosks where you can grab a quick hot dog or portion of chips.
Instead you have to use a restaurant. There are plenty – but at a price.  On our last visit a couple of years ago we grabbed pizza at the self service restaurant Bella Notte, where we had to queue to order and pay then queue again to collect the food.

The pizzas cost around 10 € each and weren’t particularly substantial or tasty. You can splash out a lot more for a better experience; the Blue Lagoon restaurant has 55 € three-course set menus for adults, 18 € for children. Brace yourself: It can turn into a very expensive day! 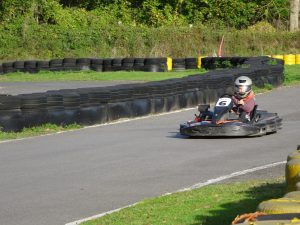 For more thrills closer to home you can have a go at go-karting at Quad No Limit on the edge of Soissons, about half an hour away from La Croix du Vieux Pont.

When karting your laps are timed and logged on a computer so you can compare speeds afterwards. Tim and Max were proud to discover they had the fastest laps at around 58 seconds, beating Harvey hands down,
They were enjoying a gloat – until friendly owner Vincent revealed he could do it in just 48 seconds.

Handily, as Tim and the older boys go-karted, the other two and I played mini golf on the same site, making it a great trip out for all the family. You can try quad-biking and paintballing there too (karting from 18 € adults, 12 € children. Mini golf 6 € adults, 4 € children, quadnolimit.com). 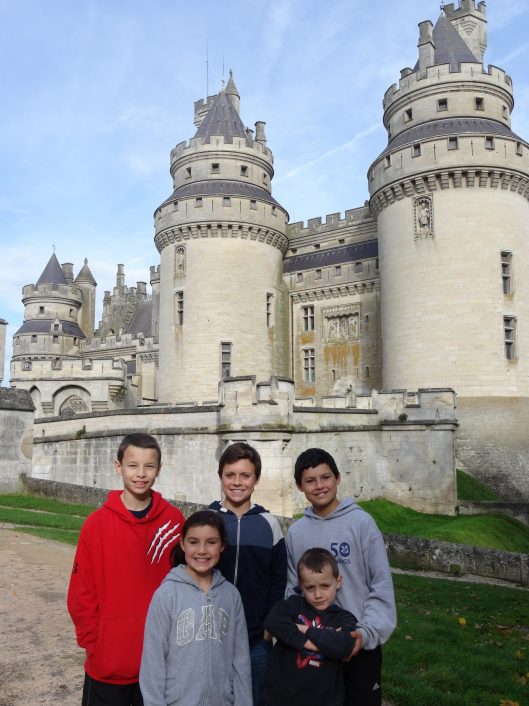 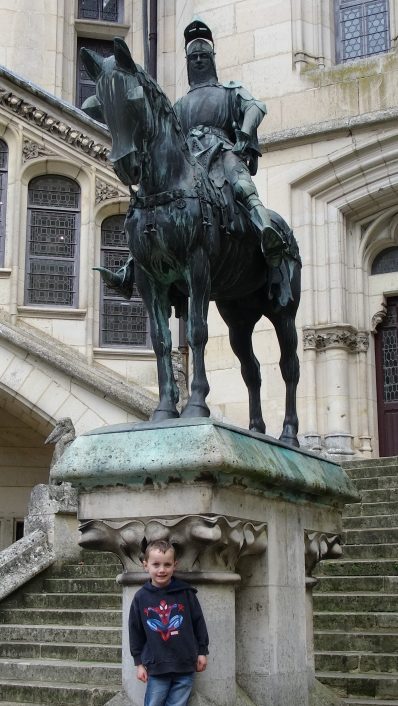 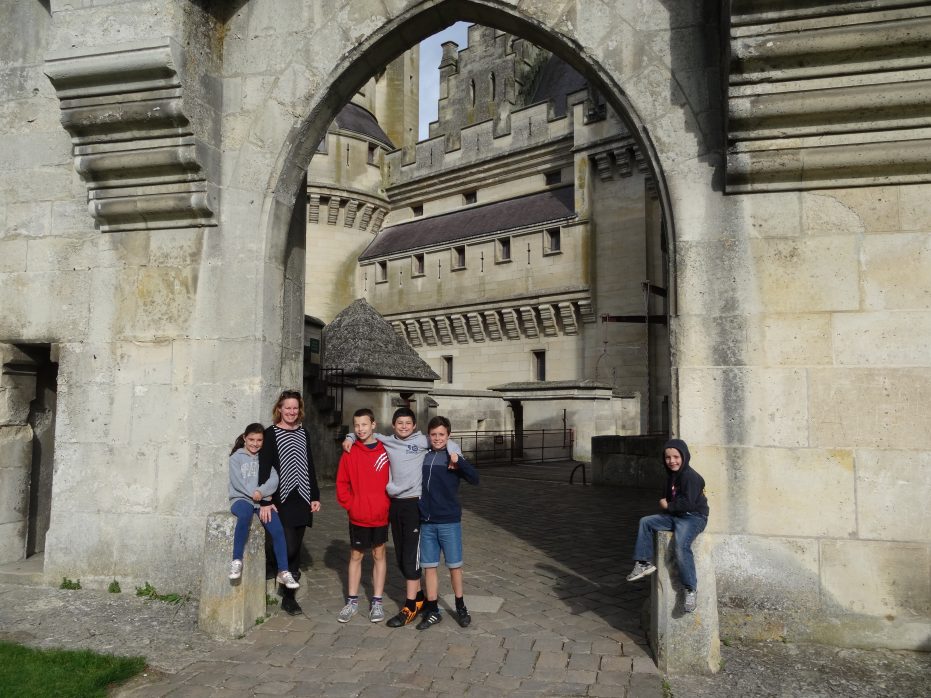 The pretty village of Pierrefonds around 12 miles away is most famous as the home of the beautiful château where the BBC drama Merlin was filmed.

Teaming with turrets and towers it’s the kind of fairy tale castle that dreams are made of; prepare for the involuntary gasps as it looms majestically into view above the trees on the drive through woodland towards Pierrefonds. 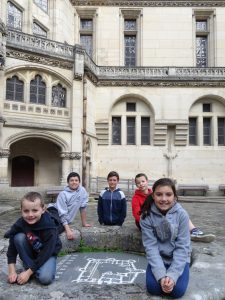 The original castle dates back to the turn of the 1400s but has been repeatedly rebuilt, ruined and restored over several centuries. It’s incredible just to stand outside and gawp at it and the wooded grounds are fantastic for the kids to explore. But don’t miss out on a visit inside.

You can imagine dignitaries parading through its stone corridors but the children’s favourite bit was the eerie, dimly-lit crypt packed with tombs of former French kings and other grandees. (adults 8 €, under 18s free).

While you’re there you should spend a bit more time mooching around picturesque Pierrefonds itself. You get the perfect view of the imposing castle from pedalos on the village lake (from 11 €/hour). For a bit of fun, you can even hire one in the shape of a swan – like we did on a last visit a couple of years ago.  Max’s friend Tom was once again joining us. 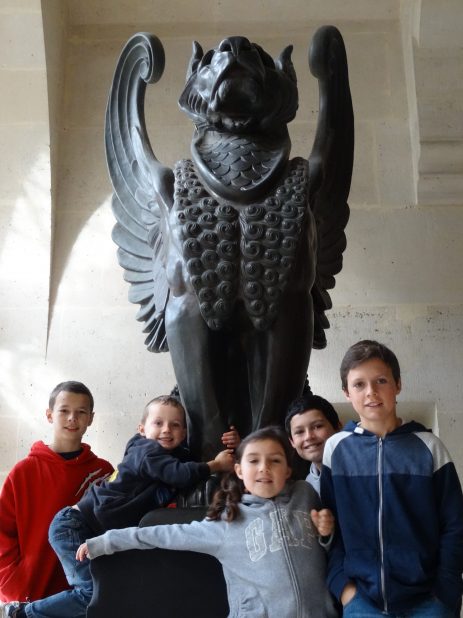 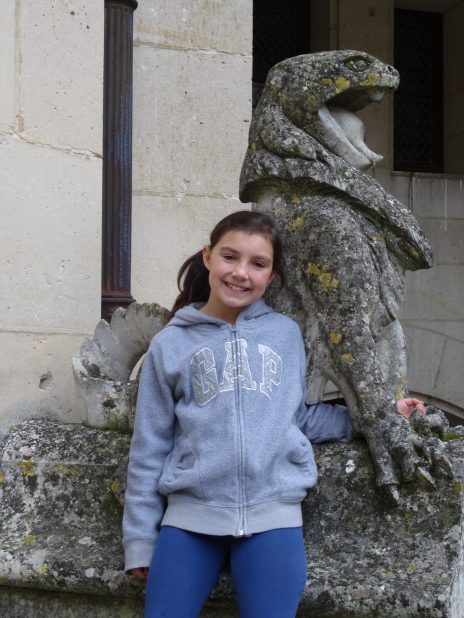 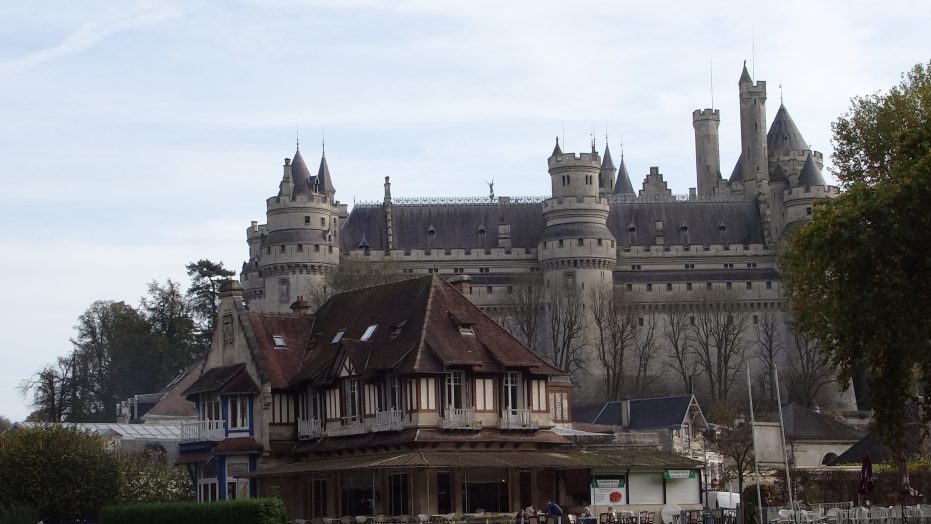 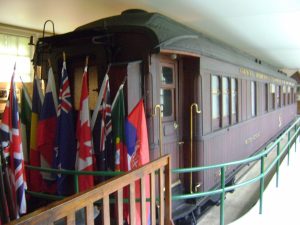 Discreetly tucked away in the sprawling Compiègne Forest is a replica of what is arguably Europe’s most significant railway carriage.

Both the armistice that ended the fighting in WW1 and the one that signalled France’s surrender to the Germans during WW2 were signed in the original and today the replica housed in a small museum in a memorial garden. It’s daunting to think that one of Europe’s best moments along with one of its bleakest were both sealed in this simple wood-panelled wagon in a remote wood.

In 1918, it was where the Germans admitted defeat as they signed the Armistice Agreement with the French and British Allies, led by General Foch. It was kept in a museum until – in a carefully thought-out insult – Hitler insisted on using it to sign another Armistice Agreement when the French surrendered in 1940. He even sat in the same seat that General Foch had used 22 years earlier.

The wagon was sent to Germany but was later destroyed on Hitler’s orders as the Allies advanced, hence the replica on display in the museum nowadays. The memorial garden is worth spending time in too – beautiful, quiet and discreet (museum 5 € adults, 3 € children 7-13 years. Grounds free). 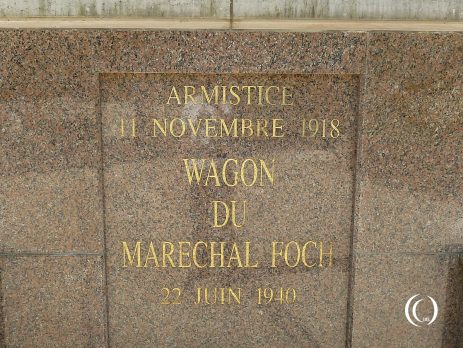 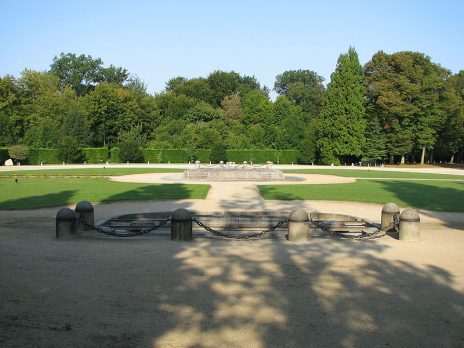