IT may be most famous for tea and toffee, but by ‘eck there’s so much more to the elegant Yorkshire spa town of Harrogate.

It’s easy to see why locals have named it the happiest town to live in three out of the last four years, citing its open spaces, culture, friendliness, safety and recreation as key.  And those factors all help make it the perfect place to take the kids for a few days.

We kicked off our trip there with an amble around Harrogate’s buzzing shops. If you’re after sweets by the quarter, handmade handbags, local designers, unique art or interior design inspiration – or a store that sells over 12,000 different buttons – you’re made but you won’t miss out on high street favourites either.

It all feels wonderfully old fashioned but the real attraction is the sheer space.  We lapped up the slower pace with a stroll around The Stray, 200 acres of open parkland right in the hub of the town and popular for picnics, dog walking, kite-flying and ball games. 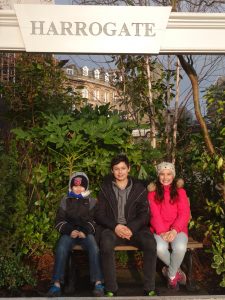 A short walk brought us to Valley Gardens, a fantastic park with an extensive play area, pitch and putt, skate park, lovely woodland walks and a seasonal paddling pool.  All the greenery and space helps give Harrogate a relaxed, charming feel, a real antidote to our normal hectic lives.

Perhaps this is why crime writer Agatha Christie mysteriously fled here in 1926, booking into a local hotel under a false name, after disappearing from her Berkshire home amid worldwide publicity.

You don’t have to go far from Harrogate to stumble upon Yorkshire’s beautiful rolling countryside either.  We headed out to Nidderdale and its spectacular limestone gorge at How Stean – etched out by the River Nidd over millions of years – to meet up with outdoor activity specialists Lost Earth Adventures, who reckon the best way to experience the dramatic scenery is from within. 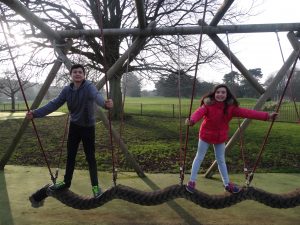 We were going to try gorge walking – also called ghyll scrambling – which involves clambering up stream over boulders and waterfalls.   But first we had to get into the gorge….via abseil.  Wetsuits on (Freddie yanked on two to be on the safe side; it was only 8⁰C after all), our guide Tom Langhan lowered each of us down 45 feet into the gorge from a bridge.

As you tip yourself off, you’re so terrified about being plunged into the chilly water below that you cease to realise you’re literally hanging by a rope.

It’s freezing at first as the water starts to seep into your wetsuit but as we started to climb over rocks we soon warmed up.  Sometimes we were knee-deep, at other times the water was so deep – it can plunge to depths of 20m – we had to swim. 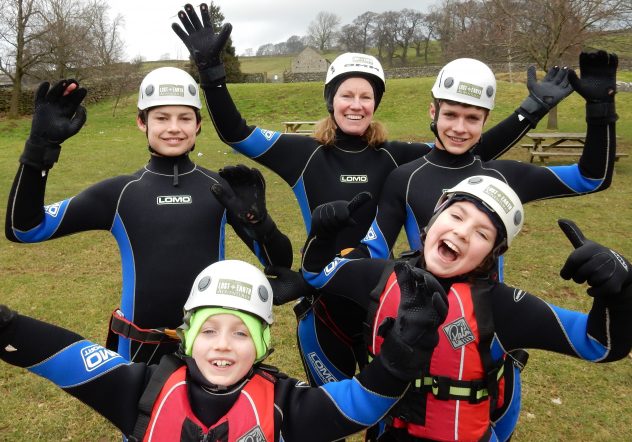 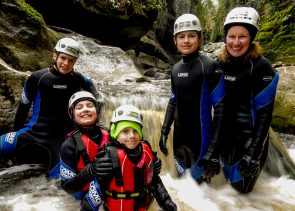 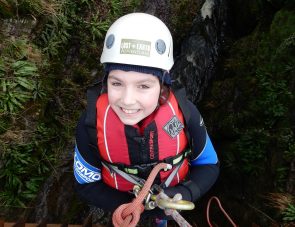 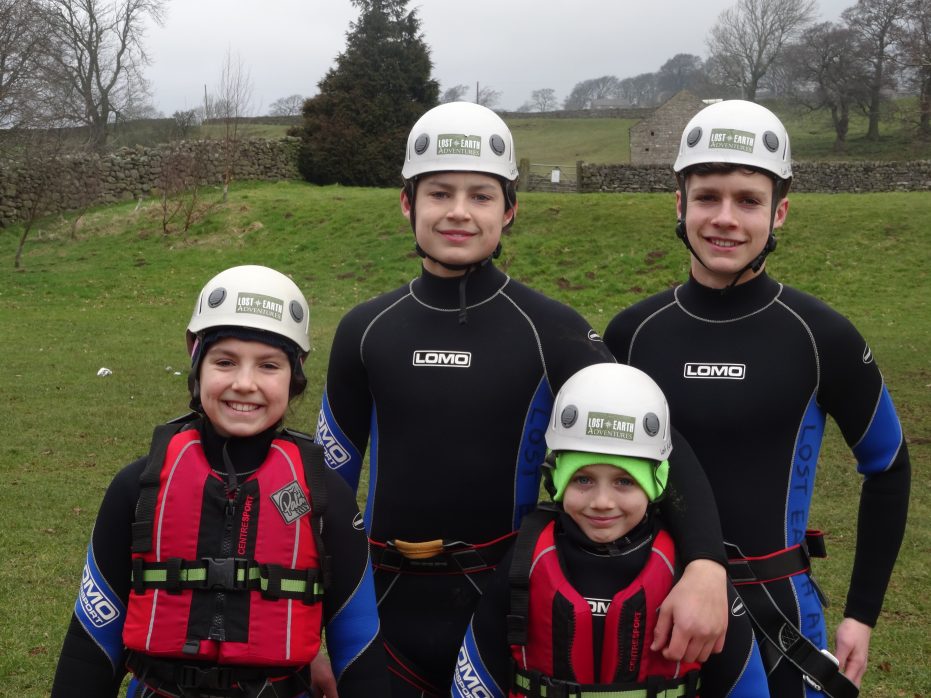 The kids grinned and whooped as they scrambled up cascading waterfalls (mum had to be yanked up…) and dive bombed into plunge pools.  Tom helpfully pointed out areas where they could slide down ice-smooth rocks and waded us through a pitch-black cave, only a torch lighting our way.

To end we climbed through another mysterious cave, said to have once been the hideout of a notorious highwayman called Tom Taylor, then surfaced to enjoy Tom’s flask of warm squash and a hot shower.

I never realised spending three hours in freezing water could be such fun…but it was.   The children haven’t stopped talking about it; I’m still trying to warm up.

Strange as it may sound, it really is an all-year activity; we went during February half term when temperatures were in single figures an still had a ball. If you’re going to get cold and wet, you might as well do it when you’re cold and wet anyway.

Next day, keen to stay a little drier, we headed out of town to Ripley Castle where we picked up hired bikes for a guided ride along the Nidderdale Greenway back towards Harrogate.

It’s a fantastic traffic-free track, much of it along the former Leeds to Thirsk railway line, with fabulous views.  Leading us was cycling expert Vern Overton, a great guy who set up his bike hire, ride guide, coaching and repair business, Vern Overton Cycling, 18 months ago after serving 30 years in the army.

He helped us identify landmarks along the way, such as the meandering River Nidd and the immense Grade II-listed, seven arch Nidd Gorge Viaduct which was once derelict but is now built into the Greenway route.

Vern rents bikes from £25 per day, guided ride prices on application (www.voc.bike, 01423 781406).  I loved the fact the kids could peddle away in safety and it was great to see how well-used the Greenway was, not just with families like us but with die-hard riders, dog walkers, amblers and runners. 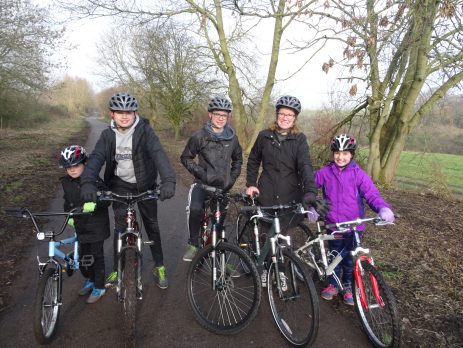 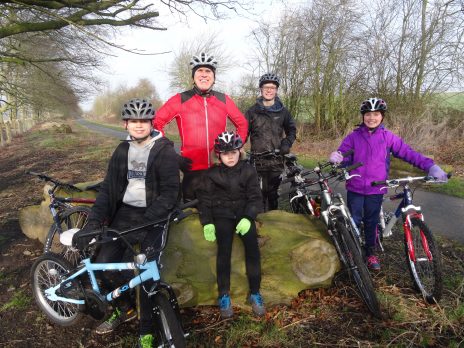 We stopped three miles in for breather, just on the edge of Harrogate and a stone’s throw from the 18th Century farmhouse-turned-pub The Gardener’s Arms, famed for once having England’s longest-serving landlord (Maurice Johnson had served his customers for 56 years by the time he retired in 1988).

Avoiding the temptation to pop in, we turned round and headed back for a mooch around the beautiful grounds of Ripley Castle itself, where you can spot deer, have a game of pooh sticks on the bridge over the lake and generally run free. You don’t have to pay to explore the grounds themselves, only the castle. 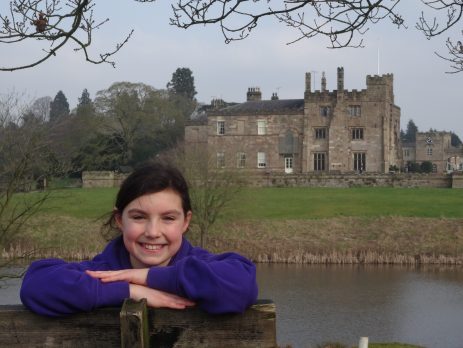 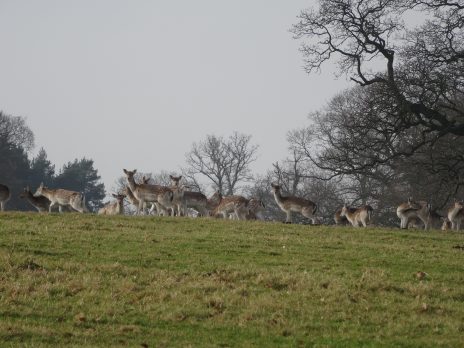 We were staying right in the heart of Harrogate in a spacious, three storey holiday home called Belmont House.  It certainly lived up to its impressive name, with four beautifully furnished bedrooms and, helpfully for a larger family, two bathrooms.

Owner Nick made us feel more than welcome, giving us a quick tour on arrival and providing us with the all-important parking permit for the road outside and – for the kids in particular – the free Wifi code.

We were just a few minutes’ walk from the world-famous Bettys tea rooms so it would have been rude not to have given it a try.   It’s become a bit of a national institution since Swiss baker Frederick Belmont settled in Yorkshire and opened his first café in fashionable Harrogate in 1919. 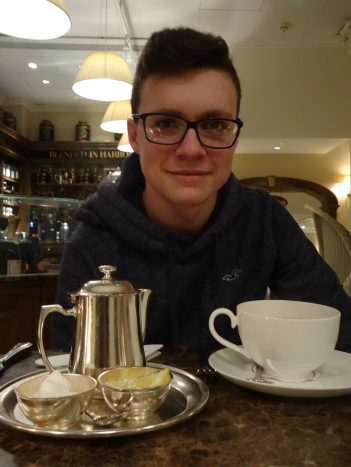 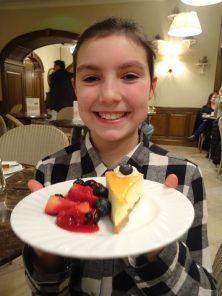 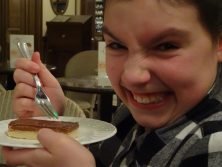 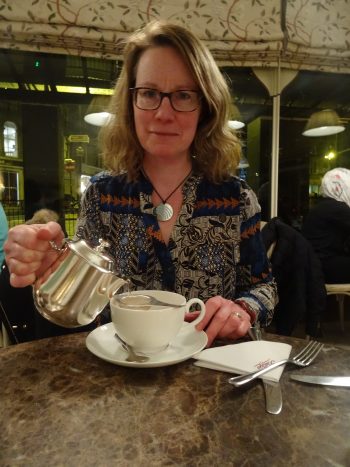 Clad in its original black and gold decorative iron front, Bettys is still run by Frederick’s descendants – now with the coffee and tea purveyors Taylors of Harrogate plus Yorkshire Tea under their wings too – and the Swiss influence remains in its menus.

Afternoon teas are very popular but with action-packed days organised we opted for an evening meal.  A couple of the kids went for the gloriously British fish and chips while I tucked into a mouth-watering haddock, salmon and prawn gratin with a potato rösti topping.  Tim went the whole Swiss hog with the beautifully light bacon rösti smothered in melted raclette cheese.

I couldn’t resist a cuppa from their imaginative speciality selection – we were in Britian’s tea capital after all – and settled on China Rose Petal,  ‘one of the loveliest China teas’ and layered with fragrant petals.

It was all just gorgeous – but we simply couldn’t miss out on their cakes either, all made in Bettys own bakery.  Both the mocha and the Swiss chocolate and raspberry tortes seemed to tick everybody’s boxes, although if you want more choice you’re welcome to choose from their on-site shop which stocks more than 300 of their own cakes, chocolates and breads. (www.bettys.co.uk, 01423 814070).  I dare you to walk out empty handed.

The setting may be formidably traditional but the food is deliciously novel and the service impeccable.  We certainly went home happy – just, it seems, like the residents.

STAY: Harrogate Holidays has a large selection of properties to let in and around the town.  Belmont House sleeps 7 and costs from £614 for three days, from £875 for a week.

DON’T MISS:  For a kids’ adventure playground that’s completely natural head to the National Trust-owned Brimham Rocks – an awe-inspiring collection of dramatic rock formations.  Children (and adults) will spend hours clambering over the weird and wonderful structures spread over 400 acres. It’s free to enter – and well worth the £5 parking fee. 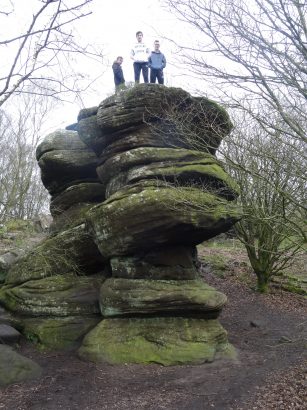 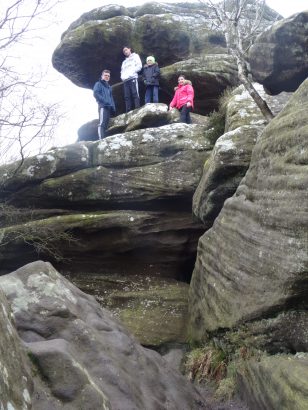 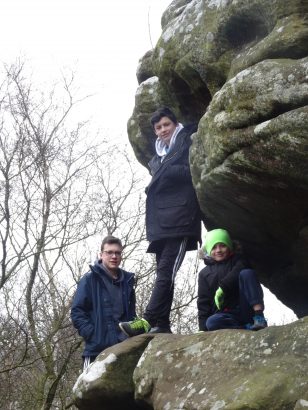 PS: Yorkshire’s also famous for its real ales. Try a pint of Black Sheep – started in 1991 by a disenchanted member of the well-established Theakston brewery family – at the wonderfully traditional pub The Fat Badger in town.  Also, take home some Harrogate Toffee in its distinctive blue and silver tin.