‘THERE’S not much to do indoors on Skye,’ sighed Mitchell Partridge as we pondered the gloomy weather approaching. ‘You want to be outside…whatever happens.’

It’s the right philosophy on an island bursting with spectacular scenery and nature – and at least we were in safe hands.  Mitchell, an affable Scots version of survival guru Ray Mears, helps visitors discover the essence of the Isle of Skye on wildlife or fishing adventures.

As the family and I joined him on a foraging trek across the heather-clad Kingsborough estate near Portree, it was clear his job is as much a hobby as a living.

I commented on how barren the hilly landscape looked. ‘You won’t be saying that soon,’ he quipped with a twinkle in his eyes. Sure enough we shortly stumbled across our first wild snacks – lovely lemony sorrel, pretty yellow primrose flowers and gorse flowers, which taste of coconut. 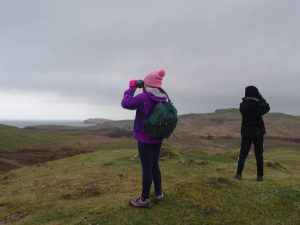 Later came chewy hawthorn leaves with their pea-like kick and wild chervil, which has a carrot-y flavour. They may not be about to replace a bag of crisps but Freddie, Rosie and Harvey (Max was on a school trip) eagerly searched for more.

Along the way Mitchell – who works under the name Skye Ghillie after the assistant who helps out on fishing and hunting trips – showed us the rocky ruins of nineteenth century houses and even iron ore pockets from millions of years ago and enthralled the kids with wildlife, geography and history anecdotes.

He kept us enthralled too – particularly with the story of how he had recently taken out a famous Hollywood actress and her family on one of his wilderness adventures. We threw names at him but he simply grinned and stayed tight-lipped about her identity, those eyes twinkling once again. 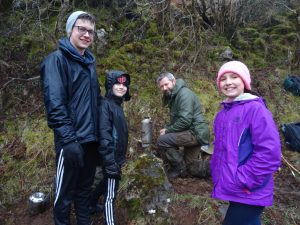 After much oohhh-ing and aahhh-ing over the stunning scenery and sea views along the way, we arrived on the shores of Loch Snizort where Mitchell showed us how to uncover large juicy mussels clinging to rocks under slimy green seaweed.

We’d planned to collect a few then cook up a feast with them and other foraged shellfish on an open fire on the beach.  But the good old Highland weather stopped that and instead we took shelter under trees and poached our mussels on a stove.

They were simply mouth-watering – and doubtless the freshest shellfish we’ve ever had.  Mind you fresh seafood abounds on Skye. At the Uig Hotel Tim and I tucked into succulent langoustines hauled from the picturesque bay below just hours earlier.  They were part of a delicious Scottish seafood platter that also included battered squid and lemon sole in a herb crumb.

My mussels starter was exquisite too, poached in Skye Gold, a delicious craft ale made from porridge oats and brewed just down the road on Uig harbour.

To keep it local Harvey went for the seared scallops from nearby Uist followed by venison sausages, sourced from hills on the mainland.  The Scottish cheese board to finish off included a collection of goodies from Hebridean Blue from the Isle of Mull the Brie-style organic Clava made near Inverness.

Meanwhile the younger kids were kept just as happy with mini fish and chips while Max demolished an enormous burger.  With so much hearty Scottish fayre on offer you’d be forgiven for ploughing into the 100-plus whiskies behind the Uig Hotel bar, including several from the island’s own Talisker distillery.

Skye lies off Scotland’s north west coast and has a real treasure trove of landscapes. To the north lies the 20-mile long Trotternish Ridge with its striking cliff faces, hidden plateaus and extraordinary rock pinnacles like the famous Old Man of Storr.

The west is dominated by the imposing Cuillin mountains – home to 12 of Scotland’s 283 Munros, which are peaks over 3,000ft. 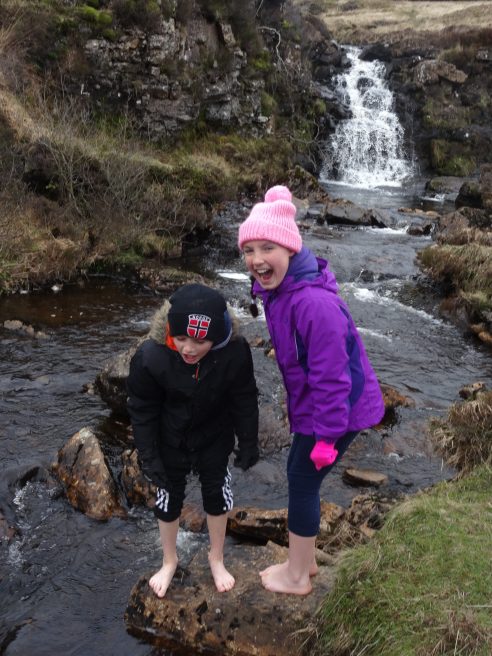 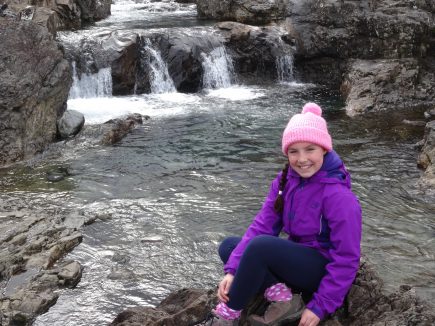 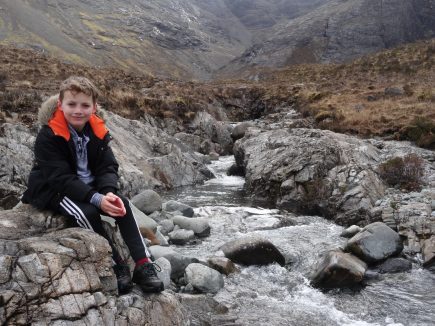 Luskentyre on Harris was recently named in  Britain’s top ten best beaches. And Skye itself was voted the place Brits most wanted to live.   Singer Harry Styles visited for his Sign Of The Times video – and was filmed hanging out of a helicopter.

Skye’s laid-back charm and wilderness is certainly captivating. We decide to unleash our inner caveman to try axe throwing, a bit like darts but with more painful consequences if it goes wrong.

The idea is to hold an axe upright by the handle, lob it towards a target then take a bow as the head lands beautifully across the bullseye.  It sounds easier than it is but fantastic instructor Matt Harrison, who runs ACE Target Sports near Portree, promised we would all plant at least one axe by the end.

He was right – and we all had a real laugh doing it.  Matt is a lovely guy who oozes charm and was fabulous with the kids.  He showed us how to stand and adjust our starting position depending on how the axe falls; it somersaults through the air so the trick is to leave enough distance to allow it to fully turn, so that the axe hits straight on rather than at an angle.

Freddie succeeded in planting one first –although to be fair he landed his axe in a chunk of wood behind the target rather than in the bullseye itself – and Harvey went on to become the highest scorer. I would have done better I’m sure but I was distracted by the sheep eating the flowers Matt had just sown. 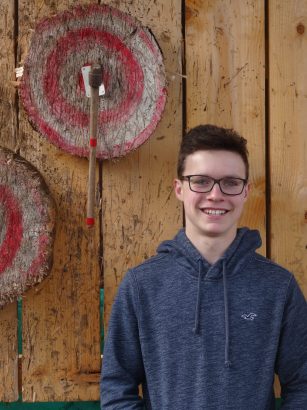 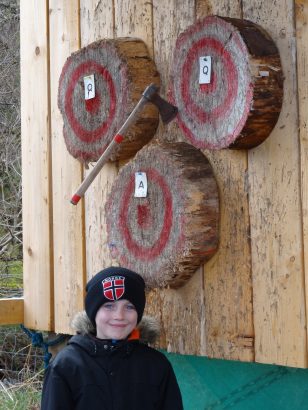 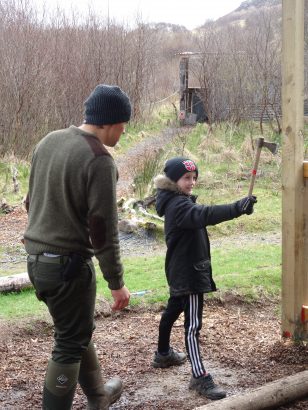 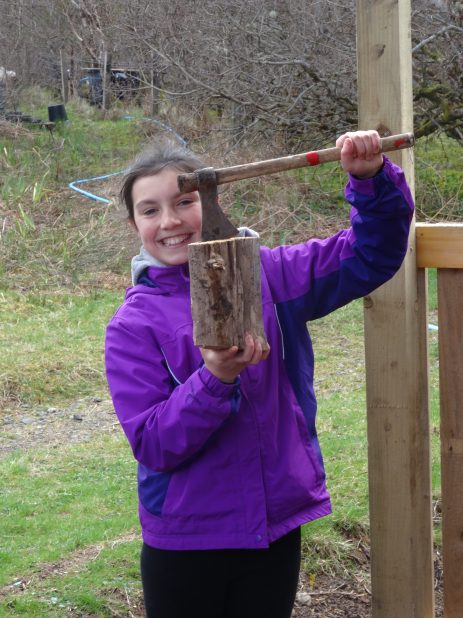 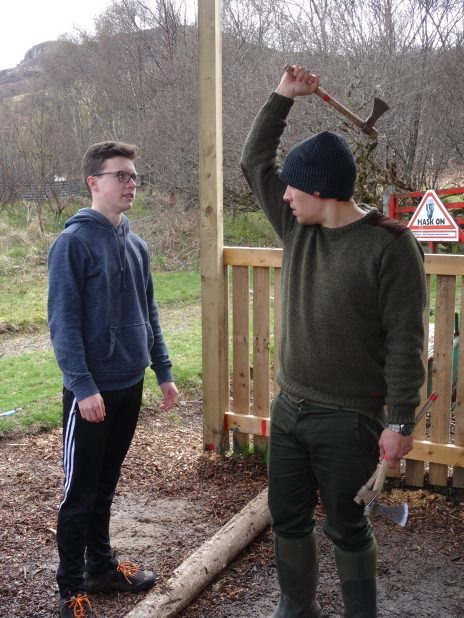 After the fun of axe throwing, next up was the rather more serious pursuit of clay shooting.  You have to be at least 16 so Rosie and Freddie had fun pressing the buttons to release the clays.

Ear defenders on, Matt showed Tim, Harvey and me how to stand and aim as clays flew through the air, giving us the choice of two different shotguns to try.  It’s tricky – but before long we were all breaking clays to smithereens. 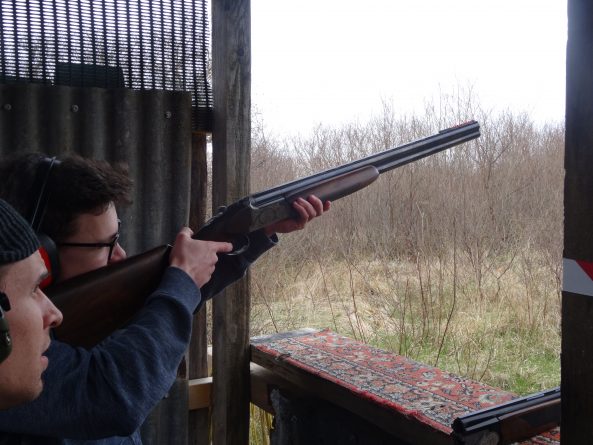 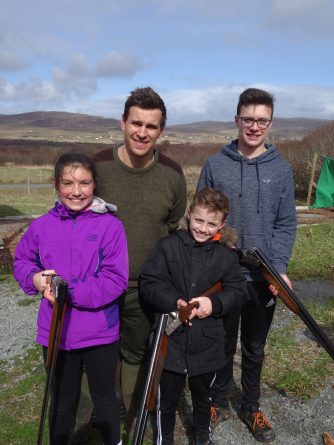 Skye is famed as the place Bonnie Prince Charlie was secretly rowed to after his defeat in 1746’s Battle of Culloden – hence the opening ‘Speed Bonnie boat…’ lyric in the Skye Boat Song.

It is also home to some of the UK’s most important dinosaur discoveries, some of which are housed inauspiciously in the tiny Staffin Dinosaur Museum, based near Ellishadder in a former cowshed-turned school.  Even more fascinating are the dinosaur footprints that remain in-situ on the island’s beaches.

Dugald Ross, who runs the museum, took us to see a foot-long print at An Corran on Staffin Slipway beach, visible when the tide is out and it’s clear of sand, and explained how the clawed shape showed it came from a meat-eater.  Later we visited Duntulm beach and discovered a whole series of football-shaped prints, left by a four-legged herbivore. Astonishingly they’re all around 175 million years old but they still spooked the kids; they looked so fresh that they were convinced a gang of dinosaurs was lurking around the corner. 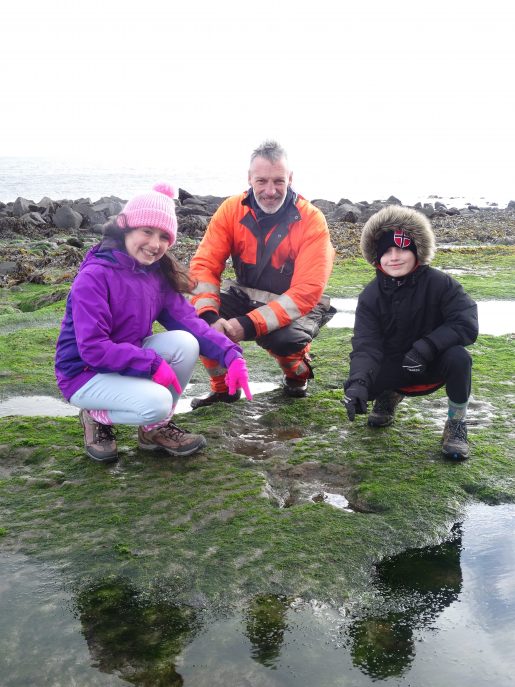 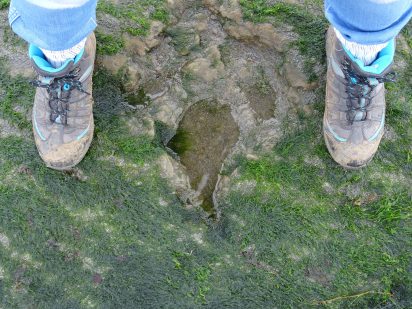 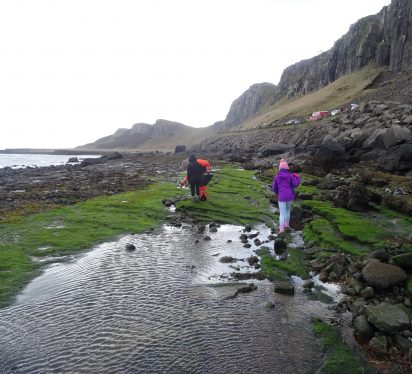 Skye’s an island of course so it makes sense to spend time on the sea so we donned oilskins for a thrilling four-hour RIB ride with boat trip veterans AquaXplore. If we hadn’t a good idea of what the good old Scottish weather could do, our RIB trip well and truly provided us with one: we experienced bright sunshine, driving rain and hailstones along the way.

It made no difference to us.  Early on the uncertain weather on Skye had helped formulate the motto for our holiday: Hope for the best…prepare for the worst.

In between crashing over waves and soaring around in circles, the boat tilting precariously towards the sea and throwing water over us, skippers Gavin and Ted pointed out birds like kittiwakes, shags and sea eagles, grey and common seals, wild goats and even a shipwreck.

The kids shrieked and laughed every time we got a soaking but my favourite bit was spotting the lovely puffins bobbing up and down on the water.

They were without their trademark red beaks which develop later in the season but they are still eye-catching with their bright white rounded chests. 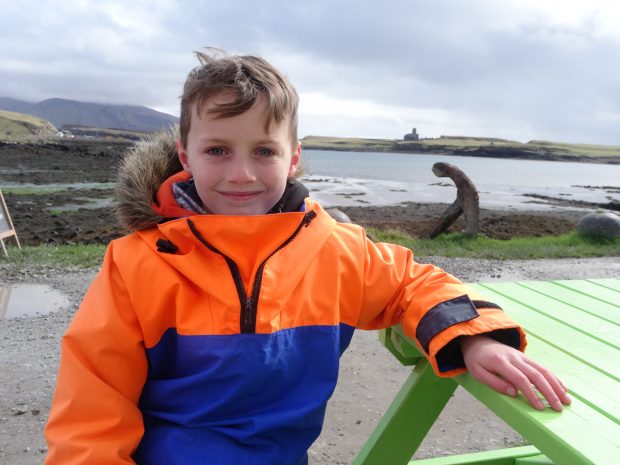 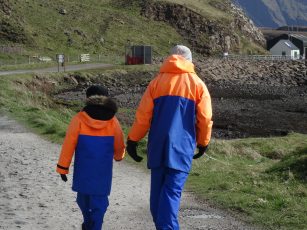 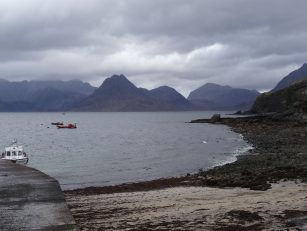 We stopped off for half an hour at tiny Canna (population 11 at last count) and popped in for a cuppa at possibly the UK’s remotest café-with-Wifi.

At other times of the year you can see dolphins, minke whales and basking sharks during the RIB ride.  All the more reason to speed my Bonnie boat back to Skye very, very soon.

GO TO IT:  Fly to Inverness from Manchester, Birmingham, Bristol, Belfast or London Gatwick, Luton or Heathrow. Skye is a three hour drive so hire a car at the airport from Avis from £33 a day (www.avis.co.uk).

PS:  The enchanting Faerie Pools, a chain of waterfalls and crystal-like pools, gets overcrowded.  Instead, head to the breath-taking Faerie Glen near Uig. The kids will love clambering up its rocky outcrops and hillocks and the views are magnificent. 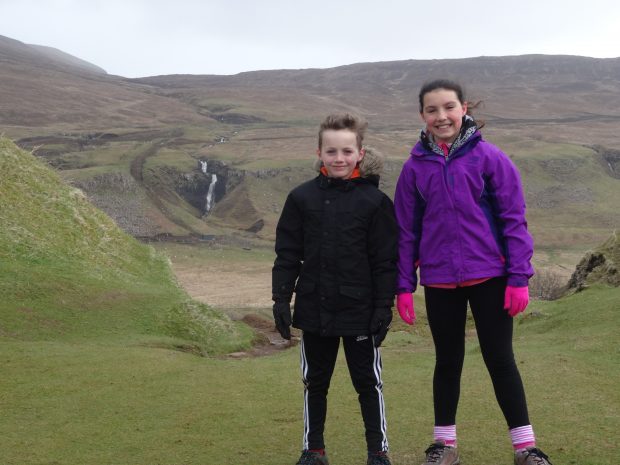 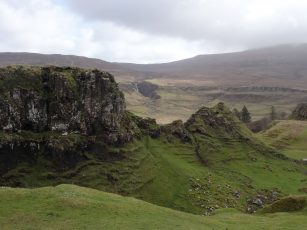 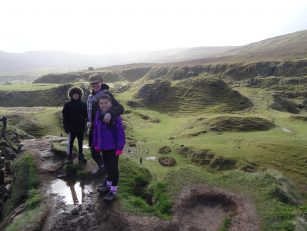 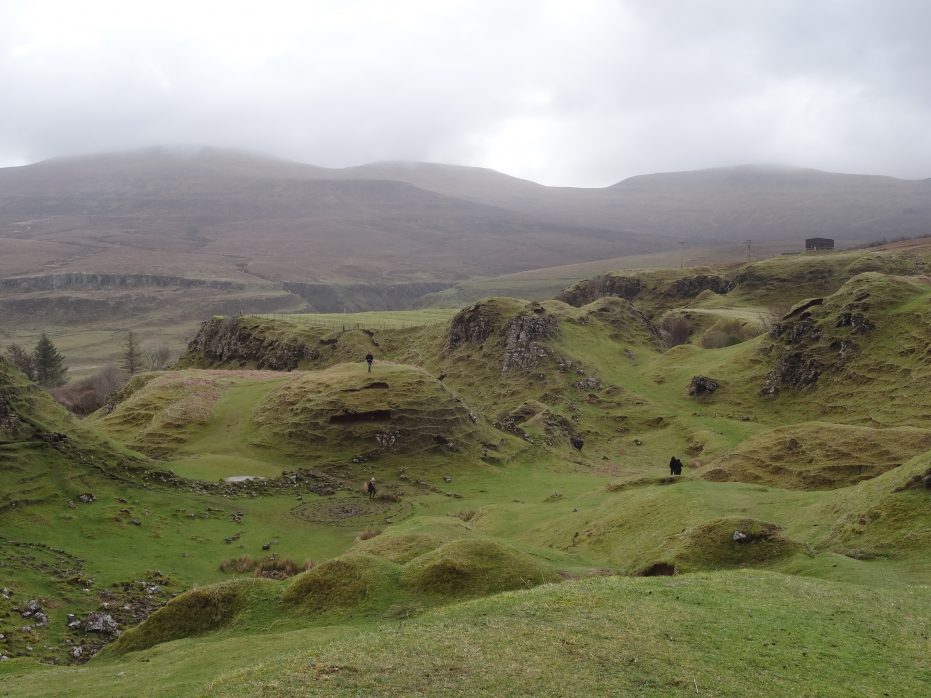