It’s 6pm and the warm evening sunshine glimmers on the gentle water.   My four wetsuit-clad kids laze on top of surf boards, casually chatting about the best wickets they’ve taken this season or their current playlist. 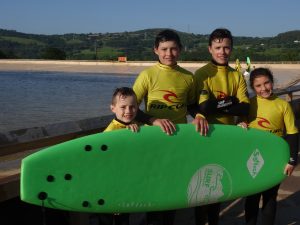 But as the familiar rumble starts up, they swing into action, paddling calmly then with greater urgency as the wave surges up behind them, tossing a couple of them underneath in its wake and propelling the other two to shore.

I hope I don’t sound like a harsh parent when I say I’m unconcerned about any stragglers being knocked unconscious and dragged out to sea by unpredictable currents.  Because this is not the sea…my precious offspring are having a surfing lesson in the world’s first inland surfing lagoon.  And it’s right here in the UK.

North Wales is cleverly carving itself out to be a leading light in the tourism world, with superlative after superlative flying out of the activity lists.  The world’s highest or longest, Europe’s first or fastest…it’s all here in what was once sleepy Snowdonia.

The mountain steam trains and cavern tours are still around but nowadays thrill seekers arrive in flocks to zip across the landscape in every way possible and to bounce, plummet and swing their socks off. And now it seems, to surf in safety too.

As you roll into the small village of Dolgarrog seven miles south of Conwy you’d have little idea you could be about to experience a world first. 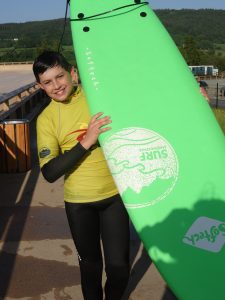 Surf Snowdonia opened last year on the site of a disused aluminium factory, empty since its 150 workers were laid off in 2007.  Some are now amongst the 80 people employed at the £15 million lagoon, which hopes to draw in around 80,000 visitors a year.

The sport of surfing was given a major boost last August by the announcement that it will be a new event in the Tokyo 2020 Olympics. Surf Snowdonia instructor Rick, a Dutchman who came over to work here, is delighted that an inland setting will tempt even more to try it.

‘It takes the uncertainty out of surf coaching,’ he told me. ‘A good instructor can coach safely even in the sea but you’re always going to get times when the waves are too big or too small or the water too rough.  Here it’s always perfect.’

I, for one, felt comforted that the kids were learning away from the sea.  A bad back – honest! – stopped me from having a go but the youngsters were joined by Tim.

Rick’s one-and-a-half hour lesson with us began with a dry-side session on how to get into the correct standing position on the board (your ‘pop-up’ technique) before the group was let loose on the water. 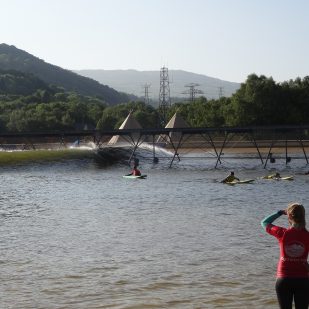 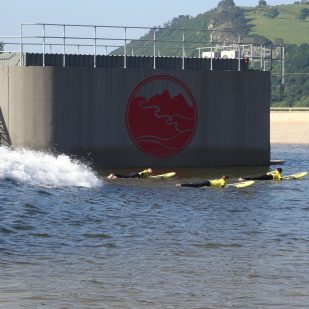 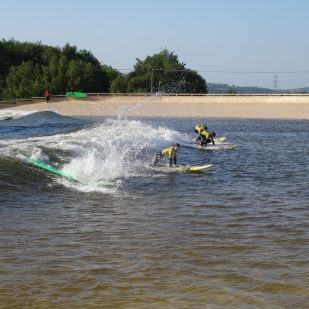 The lagoon is a staggering 985ft long and 360ft wide – the size of six football pitches – and is split into sections for beginners, intermediates and advanced.  Waves are produced mechanically every three minutes, with newbies learn in the dregs of the rolling white water.

At first most of the family ended up under rather than on top of the wave.  But by the end Tim and the older ones had all managed to surf to the shore lying down at least – and surfing-dude-in-the-making Harvey had even nailed it standing up. 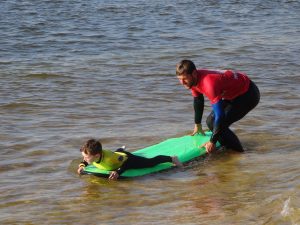 Young Freddie – put off by too many dips under the frothy water – eventually gave up on his solo bid and enjoyed surfing the crest on the tip of Rick’s board, happily oblivious to the fact the instructor was doing handstands and other stunts behind him.

Harvey and his brother Max enjoyed the surfing so much they’ve not stopped nagging me to move to Conwy – or at the very least least Cornwall – so they can hone their skills.

Brave enough for ‘the Blob’? Find out what else you can get up to at Surf Snowdonia here.

Afterwards we recovered with a lovely meal in Surf Snowdonia’s restaurant, a beautifully light and airy cafe bar with floor-to-ceiling windows overlooking the lagoon and frequented not just by surfers but by locals and visitors from further afield.

Tim and I tucked into gorgeous bowls of Thai broth with Welsh mussels – Conwy is famous for them – and sweet potato fries while the kids polished off burgers and a sharing ‘land’ platter which included BBQ pulled pork and Conwy pulled beef shin.   There’s a great selection of bottled Welsh speciality beers too; do try the local Black Dragon cider.  It’s very tasty!

Next day we stuck to dry land to experience one of the zip courses Snowdonia is becoming famous for.  Adventure specialists Zip World offer Velocity (the world’s fastest and Europe’s longest zip line) and Titan (Europe’s first four-man zip line) but this time round Harvey, Max and Rosie opted for their marathon Zip Safari, a course of 23 zip wires at heights of up to 60m spread over a third of a mile.

It takes a couple of hours to complete; be prepared to walk across narrow rope bridges and climb up terrifying ladders at times.

Meanwhile Freddie – at eight too young for Safari – had a ball on the Junior Tree Trail, a high ropes course for four-to-eight-year-olds with fun challenges like a hollow wooden log to scramble through and a tyre bridge to clamber across

Skyride is Europe’s highest and first five seater giant swing.  Tim and I watched agog as the four kids were harnessed into a row of seats and hoisted 80 feet into the air before the swing was unleashed.

Apparently the views across Conwy valley are incredible but I’m not sure any of them were taking them in as they lurched backwards and forwards over our heads.  Rosie cried.  Harvey screamed.  Freddie cheered.  Max looked frozen to the spot.   My stomach was on the floor…I can’t imagine where theirs were.

But more thrills were to come in the shape of Plummet, a 100 feet high powerfan parachute simulator.  Yes, you’ve guessed it – it’s the world’s highest.  The fearless four had to clamber up a tree with the help of metal brackets…then leap off a ledge at the top.

You’re harnessed up and attached by a cord but the idea is that you feel like you’re freefalling while special technology ensures a gentle landing.  I suspect the terrifying ascent is to help ensure everyone is ready to jump down at the top; no one would be foolish enough to want to climb back down.

It looked eye-poppingly scary but one by one they all came back down to earth without the bump.

Our activities may have been up-to-the-minute but our home for the stay was gloriously traditional. Hendre Aled is a small cluster of quaint old stone farm cottages thoughtfully renovated as holiday lets by friendly owner Pauline Lloyd.

Ours was a pretty three-bedroomed mid-terrace with an eye-catching round window at the front taking centre stage.  The tray of pastries waiting for us on arrival only made it feel more homely. But the cottages’ real beauty is their location, set out on their own in the sprawling Denbigh Moors countryside a couple or so miles outside the little village of Llanssannan.

They’re three quarters of a mile off the nearest rural lane, down a narrow farm track which takes you over two cattle grids, through fields of sheep and past herds of cows.  You really feel like you’re in the middle of nowhere and it’s the perfect place to recover after daytime adventures.

Rosie loved the other residents – the friendly farmyard cats.  There were also some lovely walks through the surrounding fields.

Nerves frayed, we decided to give the more sedate pursuit of golf a go.  For a fun and relaxed game with the kids in a breath-taking setting you’d be hard-pressed to beat Great Orme Family Golf in Llandudno.  Nestled into the side of the seaside resort’s Great Orme headland, it’s the only full sized nine hole pitch and putt course in North Wales but it’s real beauty lies in the stunning views over the picturesque bay and Conwy valley.

When we arrived, owner Mike was in the midst of chasing a small flock of sheep off the course and back towards their hillside home.

You do get a few die-hard golfers there but the atmosphere is as relaxed as the sheep’s roaming – very much pitched towards families and informal groups – and you don’t feel the need to hurry the kids up.

Elsewhere we also tried the fast emerging sport of footgolf.  Like traditional golf, you tee off and aim towards a flag on a distant putting green in the fewest shots possible – but you’re kicking a football rather than using clubs and irons.  Golf, but with bigger balls.

We played at the Silver Birch Golf Course, in the quiet village of Betws yn Rhos south of Abergele.  Owners Menna and Bryn Jones opened it up to the traditional game 21 years ago on redundant farmland and diversified into footgolf as well in March 2015.  It’s still surrounded by fields of cows and nestled in stunning countryside, a treat in itself.

They’ve cleverly designed it with both games being played on the same putting greens – albeit to different sized holes marked by different coloured flags – but split the course into two distinct halves to keep the sports separate if necessary.

It’s a beautiful course and its brand new eco-friendly club house was built by Menna and Bryn themselves just in time for them to host the Welsh Open footgolf competition last September.

And it’s easy to see why footgolf’s taking off…it’s a great game for all the family.  Rosie and I expected the footie-mad lads and their dad to wallop us completely but found that what we lacked in kicking power we made up for in accuracy.

They may have kicked the balls the furthest but when it came to putting the ladies were better.  It’s one of those rare activities that everyone has a good chance to do well in.

But that’s the great thing about North Wales. Nobody gets left out…there truly is something for everything.

PS:  Always take a top and a waterproof.  We had beautifully sunny weather when we visited but it’s likely to be chillier in the forests and hills and the weather can change in an instant.